West Ham’s hopes of a place in next season’s Champions League were all but ended after a 1-1 draw at Brighton on Saturday, while Leeds thrashed Burnley 4-0 at Turf Moor in a match overshadowed by an ugly incident between Ezgjan Alioski and Dwight McNeil.

The Hammers are now five points adrift of the top four with just six left to play for after two late goals at the Amex Stadium.

Danny Welbeck dinked home the opener for Brighton with just six minutes to go with the visitors caught chasing a winner.

“It’s obviously horrible because we had the Champions League in our sights,” said West Ham midfielder Declan Rice, who made his return from injury.

“We can’t be relying on other teams to lose. We have to go out and win. We’ve drawn too many and lost a few.”

West Ham only secured survival in their penultimate game of last season, but have posed an unexpected challenge for Europe and can still secure a place in the Europa League should they win their final two games.

“This season has been outstanding,” added Rice.

“We learned to win ugly this year. It’s been a rollercoaster but we can still finish on a high.”

Brighton remain in 17th, but are already guaranteed a fifth consecutive season in the top-flight.

Burnley also secured their survival with victory over Fulham on Monday and looked like a side already looking forward to their summer holidays as Leeds ran riot to cement their place in the top half of the table in their first season back in the Premier League for 16 years.

However, the major talking point was a clash between McNeil and Alioski, which Burnley boss Sean Dyche said will be reported to the English Football Association

McNeil shouted angrily at Alioski after making a crunching challenge on the Macedonian.

The England under-21 international appeared to suggest Alioski had dived, but the Leeds player got to his feet and responded by covering his ears and sticking out his tongue.

Both benches got involved in an argument and referee Graham Scott then called over Dyche and Leeds boss Marcelo Bielsa, as well as Clarets captain Ben Mee and Leeds skipper Luke Ayling, before play could resume.

“A report has come into the referee and that will be passed on to the FA,” said Dyche, who did not say which player was involved.

“One of our players made the report and I was there to be a witness to the report, not the incident.”

Asked if there was a racial element to the complaint, Dyche declined to comment further and the FA said it would await the report before commenting.

Bielsa said he had not seen Alioski’s reaction.

“If there was a gesture I didn’t see it. I saw there was a dispute but I didn’t think it was too different to what usually happens within a game.”

Dyche withdrew McNeil moments later as he was replaced by Johann Berg Gudmundsson, though the Burnley manager said the decision was unrelated.

“I was going to take Dwight off,” he said. “He’s put in a lot of effort this season and done very well over this season.

Mateusz Klich put Bielsa’s side ahead on the stroke of half-time.

Leeds punished Burnley after the break as Jack Harrison added a second before providing the two assists as Rodrigo came off the bench to bag a brace.

Southampton beat relegated Fulham 3-1 to move up to 13th. 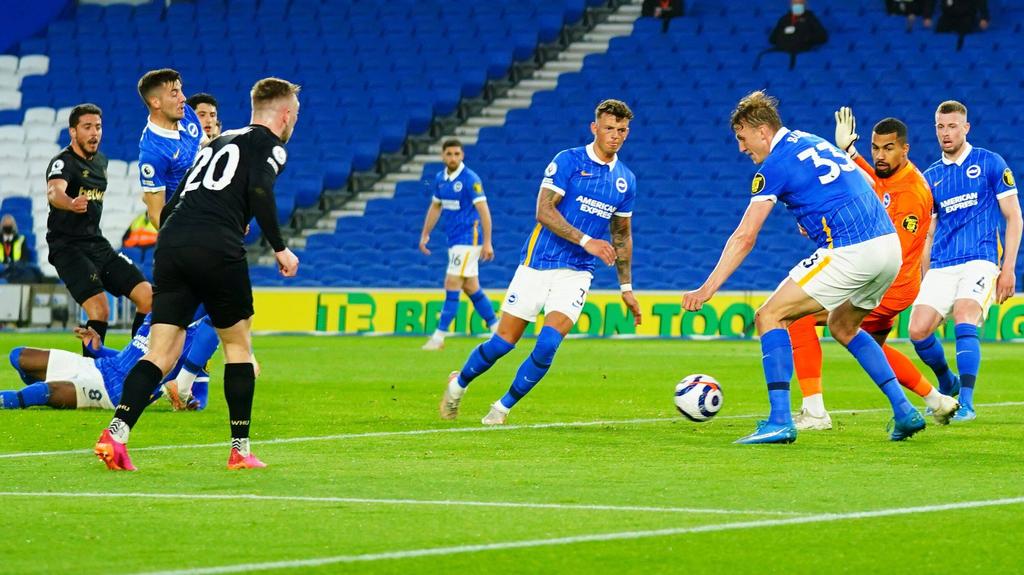